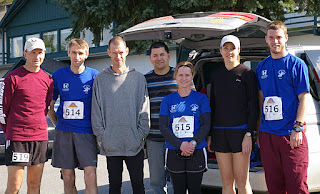 This year, instead of participating in the 50 mile ultra version of this race on October 23, I chose once again to run in the relay portion. The Nittany Valley Running Club has been having a draft to pick relay teams (Draft Challenge Relay (DCR)) for this event for many years. It is a fun, competitive, atmosphere that really brings the club together. Everyone throws their name in the figurative hat, sends in a bio of race times and other information, and then captains are chosen and a draft night is held at a local watering hole. I had done this a few years ago when they ran with 7 person teams.
This year it was decided to run with 6 person teams. Unexpectedly, I got chosen as one of the captains (some of the faster runners were not participating this year) and had to take on the task of pouring over bios and choosing a team. Draft night came, we chose our teams, and then the teams got together and chose which legs they would run. The captains, of course, get stuck with the toughest legs, which this year was the leg 4/10 combination, two long uphill legs.
After the normal trash talk (although it seemed to be down a little this year), race day came and we were off to the woods. It is a beautiful course, mostly in Rothrock State Forest south of State College, and a beautiful time of year to be running. It is almost all on dirt roads in the woods. Our team was doing well and running about fourth out of 10 teams for most of the race. I felt fairly good on leg 4 and managed to pass a couple other captains on the climb.
Then tragedy struck. As we were traveling in the van to the leg 9 transition zone, we passed the three other teams that were in front of us. The first place team had a sizable lead and their leg 8 runner, Ed Thompson was running well when we passed him. As we waited at the transition zone, Ed was not the first runner to show up. The other teams started to come in and they brought word that Ed had fallen by the side of the road and there were people trying to help him. We did not know what this meant at the time, but since there was nothing we could do about it, we did what we could, which was to keep running.
I didn't feel quite as strong on leg 10 but held my own, I guess, and then our leg 11 and 12 runners finished strong and I believe we ended up in fourth place amongst the DCR teams. Afterwards we were waiting at the finish line, watching the other teams finish, when the word came that Ed had a heart attack and had died. We were all stunned by the news. He was having fun and had looked so good not very long ago. The joy of the run and the competition was now tempered by sadness.
The emails were flying around, especially amongst the captains, about what to do with the situation and the appropriate way to handle the team results and how best to memorialize Ed. A number of the teams had to forfeit because runners couldn't get through as the ambulance had blocked the road for awhile. I disagreed somewhat with the prevailing opinion that we shouldn't publish the results on the club web site and all the teams should forfeit and we shouldn't compile stats (there is always weeks of rehashing the results). I think there is an appropriate time to mourn but then I think we need to get on with life. That is how I would want it to be for everyone else if it was me lying by the side of the road. I wrote the following email and sent it to the captains. I spent a lot of time editing it because I certainly didn't want to be dismissive of the tragedy.

I will go along with whatever the group wants to do. Yesterday was tragic and I think it is appropriate to somehow memorialize Ed. I do like what Mike is willing to do on the Tussey web site with the memorial to Ed. I do agree that we shouldn't be concerned with winners or losers or order of finish, given what happened. I like Tom's idea about not listing the results on the NVRC web site but just listing the teams and a memoriam to Ed. I'm not sure, however, that we should try to wipe away everything about the day.
Given my family history, I wouldn't be too surprised if I would die someday out on a run. I tend to think that running will increase the quantity and quality of my life, but I understand that there are risks. Quite frankly, I can't think of many better ways to go, doing something that I enjoy. If that happens, feel free to have a memorial but don't let it get in the way of living and enjoying life. I really won't care anymore. I would sooner that you take a run in the woods with some friends and breathe the air a little deeper and enjoy what you have left, including the rivalry and competition that makes you all smile and drives you to thrive. My father died this spring so I've had some time to ponder this stuff in the last half year, and I think he would agree with me. Celebrate life and the lives of those who have passed away, but don't stop living because of death.

I don't have the opportunity to run with you all every day and work some of this out so I don't know what all you talked about today. I really don't care about the DCR finishing order, or whether we all DNF or not, although I must admit that I was looking forward to all of you geeks cranking out the spreadsheets and the chitchat that would ensue. For me, yesterday started out as a beautiful day in the woods and ended up as a very sad, but still beautiful day in the woods. I did not know Ed and only chatted with him briefly, but I think he enjoyed being part of the event.

I do think that an appropriate gesture would be to buy flowers on behalf of the NVRC for the funeral (or do something in lieu of flowers if the family has requested it). I would certainly be willing to put some money towards that. Again, I will defer to what the group wants to do and am okay with whatever you decide. I'm sorry about the rambling email and I certainly don't mean to lessen at all the magnitude of the tragedy that occurred. These are just some of my thoughts and what I would want you to do if it happened to me.

It might be nice to organize a run from Colyer in the next few weeks, and run leg 9 and half of leg 8, out and back, and remember Ed and the joy of running.

We did indeed have that memorial run and it was nice. A few people had already arranged a memorial on the spot and it was a beautiful place in the woods. In the end, life goes on for the rest of us and we must carry on. We run with the memories of those who have gone on before us. We try to learn from them and remember them but we live with the realization that we can't outrun death. When it comes, a little spot in the woods on a run wouldn't be that bad.
Posted by Jeff Smucker at 5:41 PM