Pat Singletary, Meira Minard and I traveled down to Maryland to run the Seneca Creek Trail Marathon/50K, which took place this morning, and those two sure know how to crush the last 10 miles. The advertised distances in this race are just wrong: the marathon is about 30 miles and the 50K is almost 34 miles. The Race Director knows this, of course, but that is part of the charm. We set out to do the "50K" but you don't really have to decide until mile 16, when the "50K" people take an extra 3.5-4 mile loop around a lake. Of course while you are doing this, some of the marathoners are getting in front of you on the main trail and you have to get around them later on.

You've got to love a race where the Race Director starts the race by saying "Is everyone here? Okay get out of here!" The three of us started out together and they took the smart/conservative route for those who have never gone that distance and didn't push the early pace. I got around a few runners a mile in and thought I'd try to push it a little to see what would happen. I was hoping to run a similar early pace to what I had run last year, but not bonk in the end like I did last year. My legs, however, started to feel heavy early, around 6 miles in, and I soon discovered I probably wasn't going to be able to hold as good a pace as I had last year. A little more tapering probably would have taken care of that, but this wasn't necessarily one of my goal races (those would be Boston and Massanutten) this spring so I hadn't done a proper taper.

Meira, Pat and I actually ended up running a similar pace after the first few miles and around mile 17 or so I saw them in the distance through the woods and it seemed that they were starting to catch up to me. I tried to pick it up a little because I was afraid if they caught me I would not be able to hang on to their pace. By mile 23, however, I figured it was inevitable and I would rather run with them and waited for them to catch up and let them lead so I wouldn't be in their way. The next 10/11 miles were quite a ride.

They were running a great pace for the end of a trail ultra and looked good while my legs were feeling a bit beat. I believe their strategy of holding off a bit at the beginning was paying off for them. I just tried to hang on to the back of the train and not let go. What happened next was kind of fun. I got to watch while they took turns in the lead and went on the hunt. We'd see some unsuspecting runner in the distance and I would say to myself, "Oh shoot, here we go again." The pace would quicken, I would struggle to keep up, and soon we would blow by that runner and head for the next. Finally one older gentleman refused to let us pass. He tried to stay in front and block our attempts to pass, but he had to eventually give up. Meira and Pat were on fire. They would drop me going up hills and then I would struggle to get back in contact going down the hills. I kept telling myself to just hold on for another 1/4 mile and then repeated that.

Finally we made it to the finish line in 4:42 and ran across together (okay, Meira beat us by 1/2 a second), in 3rd, 4th and 5th place, beaten only by nipple-ring man and some other guy. As we were sitting around eating the race food afterward, it was admittedly fun to hear a number of guys say something to the effect of "I thought I was doing okay and then these three blew by me." This year the trail was about 2.5 miles longer than last year but Meira even beat the women's course record for that shorter course (and was close to beating the marathon course record when it was only 27.5 miles long).

And then there is Pat. Someone please explain to me how a guy who has never run farther than 16 miles at once in his life can more than double that distance in a race and crush the ending. It defies conventional wisdom. After today, I wonder why I'm doing longer training runs (oh yeah, I do kind of enjoy them). I understand that he normally runs a faster pace than me so the pace was easier for him, but still, it was twice as far!

It was truly a pleasure to run with these two, although I'm going to feel it for a few days. I wouldn't have finished nearly as well without them pulling me. Oh yeah, I forgot to mention the shoe-sucking mud. It had stormed the week and night before and the trail was a mess. It kind of added to the fun. 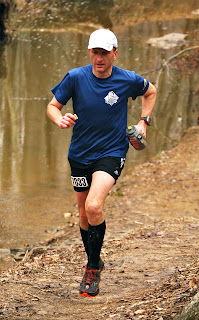