Fun and Mud at the Finger Lakes Fifties

The 25th anniversary edition of the Finger Lakes Fifties was held on Saturday, July 6, 2013. I had heard about the race for years from friends who have run it and finally decided to check it out myself. Registration for the race opens January 1st of every year and it fills up quickly so I had to make a decision early in the year. I decided to sign up for the 50 mile version, although you can change your mind mid-race and drop back to the 50K. The course consists of three 25K loops, with an extra half mile baby loop at the end if you do the 50 miler. There is also a 25K option, although you have to register specifically for that as it starts at 8am versus 6:30am for the 50K/50 mile options.

Faith and I drove up on Friday afternoon and had reserved a room at the Red House Country Inn, which is actually located on the course, on the only paved section of road that is on the course. This inn was 1.5 miles from the start/finish so it was the most convenient place to stay that didn't involve pitching a tent. There was a group of others from State College that were also staying there. All of them were just doing the 25K except for Tara Murray, who was taking on the 50K.

On Saturday I got up at 5am, ate some Cheerios, and Faith drove Tara and I to the start. The morning was already warm, probably around 70 degrees, and humid. We met a few other 50 milers from State College, John Fegyveresi and Rich Bundro, near the starting line and chatted till it was time to start. The race started and we were off. My goal was to stay in the 9 to 10 minute per mile range as long as I could and see what developed. I've been having a lot of calf trouble, especially with the left one, and I was very concerned that it wouldn't last 50 miles, let alone 50K. I was trying to take it as easy as possible on that left calf. 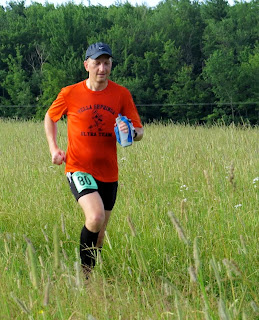 The majority of this course was single-track, with some double-track, dirt road, horse trail and just about a 1/4 mile of blacktop thrown in. It had rained a lot the weeks before so mud was a major issue. This was the muddiest course I have run, although the Vermont 50 was pretty close a few years ago. The trails that horses were allowed on were in the worst condition for running and they just got worse and worse with each successive loop. All in all, however, the course has a pretty good variety and was enjoyable to run. There are three cow pastures where you actually have to open and close gates behind so that the cows don't get out. These are kind of the signature parts of the course. The one pasture gave great views of the Seneca Lake valley as we were up in the surrounding hills of the Finger Lakes National Forest.

I ran a 2:33 split for the first 25K loop, which is about what I wanted to do. My calf had been bugging me some, especially around mile 13, but the pain had faded a little so I was hopeful. The announcer said I was in 10th place (including 50K and 50 milers since everyone could still choose at that point) when I went through the finish line at that point. I still felt pretty good, although it was getting hotter. I had carried a water bottle from the start and I started to fill it with ice at every aid station, as well as putting ice in my hat to try to keep my core temperature down. Most of the aid stations were about 3 miles apart so it was easy to keep icing up. I was eating some PB&J sandwiches, eating Pringles, and taking in some Heed as well. I started to gradually pass some other 50K/50 mile runners during this loop and kept up a decent pace. My second loop split was 2:41.

I got to the end of the second loop and had to decide. It was really hot by now and there are parts of the course that aren't shaded to the mid-day sun so I knew the last loop would be the most brutal. My calves were still in decent shape and hadn't really gotten any worse during the second loop. I really didn't have a good reason to quit, so I felt like I needed to keep going and complete the thing. I changed my shirt and hat, put on more sunscreen, grabbed some food and walked out of there. The first mile of each loop was downhill and I started running after I was done eating and felt pretty good. Then I hit the uphill. My legs were very unhappy about this. It was going to be a 16 mile grind and it really hit me at that point. 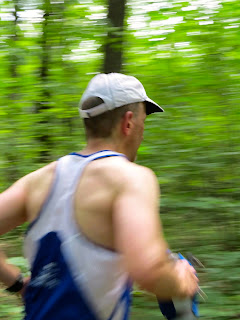 So I ground it out. I ran when I could but I took more walk breaks on the uphills. I started to take a lot longer at aid stations. I'd drink multiple cups of soda with ice and ate watermelon before moving on. I've been in worse shape in races before. My stomach was okay. I could still grind out a run, even on most of the uphills. The section of road and horse trail from mile 11 to 14 of every loop was the worse. There is a lot of gradual uphill and the horses had the trail really chewed up. There was no shade towards the end of this section so it was also the hottest. I finally made it through here for the last time and knew I was almost done.

I made it back to the start/finish, did my 1/2 mile baby loop and finished in 8:30. I'm fairly happy with the time. I was hoping to do a little better but I wasn't really sure what kind of shape I was in. Course conditions were tough, although the winner was within a few minutes of the course record.

I was as spent as I've ever been after successfully finishing a race. I found a shady spot and lay there and just kept ice on my head to try to cool down. I hadn't had issues with cramping on the race course but I could feel that my legs wanted to cramp now. An older guy came through 15 minutes after I did (just finished the 50K) and I was laying there with my eyes closed and I heard him start to throw up near my head. The medics were coming over to assist. I tried to stand up to move and started to cramp. I ended up crawling away backwards just to get a little more space. I was kind of pathetic.

I am very appreciative of my wife and the other State College runners who brought me ice and food while I was recovering. They all looked way too fresh, however. That is one of the great things about trail races: many of the other runners just hang around to offer support and encouragement to their fellow runners, well after their races are done. It is a fun atmosphere and even though there is certainly competition occurring (which I definitely enjoy), the camaraderie of runners is a big part of the event.

When I finally got back to the Inn and took a shower, I about went through the roof and realized how badly I had chafed. Even though I had used Body Glide liberally before the race, the humid conditions and being constantly drenched in sweat are difficult to deal with. This one will take a while to get over.

All in all, it was a fun weekend. I'm not sure I would do the 50 mile version again so soon, but I could be convinced to do the 25 or 50K. The course is enjoyable and it is well organized and the people are great.

Posted by Jeff Smucker at 12:43 PM No comments: