May 6 - After our adventure in Zion on Tuesday into Wednesday morning, we took Wednesday off from running. We only had two hours of sleep so we took our time in the morning and leisurely drove up to Bryce Canyon. We were supposed to run 20 miles or so on Wednesday but decided to attack Bryce on Thursday. Thursday morning dawned beautifully but chilly. The Bryce Canyon rim is above 8,000 feet so altitude was again going to be a factor.

We got in to the park and started down the Queens Garden Trail from Sunrise Point before almost anyone else was there. The Queens Garden Trail is a beautiful trail that descends amongst the hoodoos that are the signature feature of Bryce. The trails were hard packed and easy to run on. After a few miles we cut over to the Peekaboo Loop Trail. This is more of the same rolling terrain down in the canyon. After that loop, we ascended back to the canyon rim on the Navajo Loop Trail up to Sunset Point. This was about a 6 mile run.

After we got to the rim, we headed north towards Fairyland Point on the Rim Trail. At Fairyland Point we descended back down into the canyon on the Fairyland Loop Trail. This was more of the same running. Rolling hills, red rock and hoodoos. I believe this trail is less used because it is longer, it is separated from the main amphitheater, and the bus doesn't go here. This was about 9 miles, including the run on the rim.

The altitude definitely kicked our butt all morning on any kind of incline. This was a very enjoyable run, and while not as epic as the Zion run, it may have been my favorite of the week. We had already checked out of the motel in the morning so we just headed north to interstate 70 and then out towards Moab. There was, of course, a necessary stop at Dairy Queen for lunch and Blizzards. The drive over to Moab was really nice: canyons and mesas and just a grand scale.

One note: the video at the bottom of this entry is Jim and I going over the various "tapping" techniques he learned to deal with his fear of heights using accupressure points. 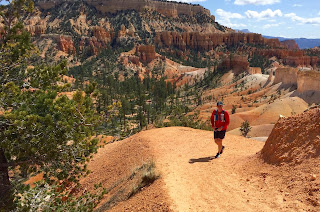 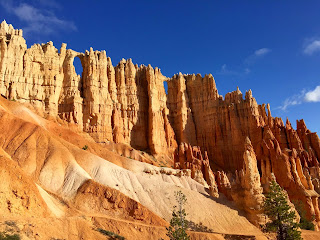 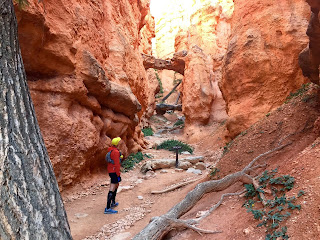 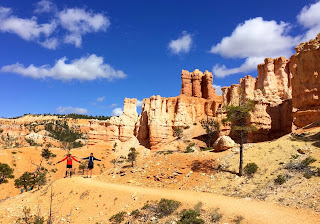