August 4 - The plan for today was to make the climb to Amphitheater Lake via the Taggart Lake Trailhead, an approximately 14 mile trek. Jason had to be back early to start his trip back to Kansas so we had to make a shorter day of running.

We got to the Taggart Lake Trailhead at about 8:30am and began the day with a moderate climb to Bradley Lake. On the way we spotted our first bear on the trail. This was an adult black bear of average size. I was in front at the time and scared it out of the brush about 25 feet off to my left. It scared me as well but it quickly ran in the opposite direction. It was too quick for us to get a picture of it.

We got to Bradley lake, a beautiful little lake at the base of the Tetons, followed the trail around it, and then began the climb in earnest. The trail to Amphitheater Lake is a relentless series of switchbacks that keeps climbing and climbing and climbing. It is mostly open and there are numerous good places to stop and look over the whole Jackson Hole valley.

Finally we got to the top into an open forest and Surprise Lake was off to our left. Like all lakes at this altitude in the Tetons, the water was clear and blue and cold. After a quick snack, here we continued the short distance to Amphitheater Lake. There was a trail we could see that continued up the mountain beyond the lake so we decided to follow it at least a little way and get up above the lake. This trail soon got sketchy/rugged and we decided to turn around and head back down the mountain. 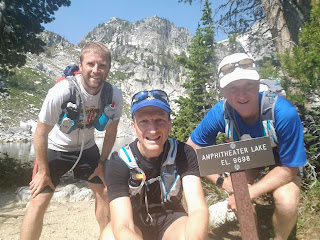 We made good time going down. It was pretty good trail for running: not too steep and not too rocky in most places. The only slowdown was all of the hikers that were coming up the trail. The trail is fairly narrow so there isn't a lot of place to pass. We finally arrived at Taggart Lake and Jason and I had to jump in. The trail was dusty so it was a great opportunity to wash the dust off.

We got our gear back on and ran the 1.75 miles back to the trailhead. The distance was a little over 15 miles for the day with over 3600 feet of climbing. I have felt stronger each day that I've been here as my lungs and legs adjust to the terrain and as I get another night of decent sleep. Tomorrow Jim and I plan to run up the Jackson Hole Ski Resort slopes to the top and run around on the Teton Crest Trail.